Respiratory Syncytial Virus (RSV) is the leading cause of hospitalization in babies under age 1.

RSV is a highly contagious virus that can lead to respiratory illness in babies, including lung infections such as bronchiolitis and pneumonia.*

RSV infections can go from mild symptoms to hospitalization in less than a week.

Mild symptoms may include a runny nose, sneezing, and coughing, while severe symptoms can include wheezing and difficulty breathing.

* Bronchiolitis (bron-key-oh-lie-tis) is a viral infection in the smallest airways (bronchioles) in your lungs. When the bronchioles swell and become inflamed, mucus may build up, leading to congestion and difficulty breathing.

*Pneumonia (noo-mohn-yuh) is a lung infection that can cause mild to severe coughing, fever, and trouble breathing.

RSV can often mimic a cold or the flu. But as the infection becomes more severe so do the symptoms. Keep a close eye on your baby if you notice any of the following: 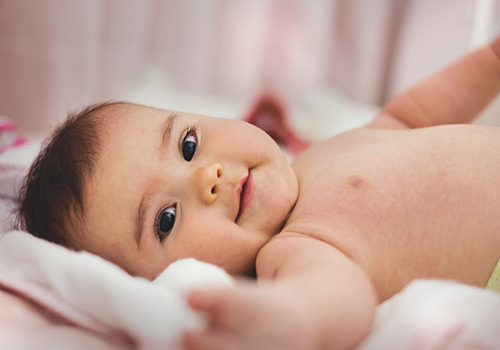 If you notice any of the following in your baby, contact their doctor right away:

RSV spreads incredibly easily. Talk with your family and friends about practicing the following healthy habits to help protect your baby from RSV:

RSV is unpredictable and all babies are at risk.

We created a guide with information from the CDC to help you understand what your baby might experience as RSV progresses.